Kate Scottow pleads not guilty to charge under Communications Act, trial set for 2020

Kate Scottow pleads not guilty to charge under Communications Act, trial set for 2020

A breastfeeding mother of two kept in police custody for 11 hours after misgendering a transgender woman on Twitter pleaded not guilty to charges in court on 18 September 2019 before her defence barrister announced she will be making a ‘bad character application’ regarding the complainant.

Kate Scottow, 38, was arrested in front of her children last December after a complaint was made to police by Stephanie Hayden, 46, a trans woman who describes herself as a lawyer and social commentator, over messages posted on the social networking platform.

Mrs Scottow was charged in August with ‘sending false messages’ but the charge was amended by the Crown Prosecution Service to ‘persistent’ messages during the hearing at Stevenage Magistrates Court. The prosecution counsel, Daniel Siong, told magistrates: ‘This is a novel case’.

As a trial date was agreed for 6 February 2020, defence counsel Diana Wilson of 9 Bedford Row Chambers said extended time in the witness box for Ms Hayden would be required alleging ‘because of her extensive bad character’. Ms Wilson added: ‘I can’t bring it [the application] until I have the relevant material.’

Earlier she noted: ‘There is quite a lot of disclosure pending.’ 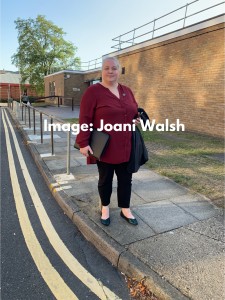 The defence also stated its intent to make an application over abuse of process.

The Crown’s case against Mrs Scottow, a PhD student, refers to ‘making persistent use of a public electronic communications network’ for the purpose of ‘causing annoyance, inconvenience or needless anxiety’ to another under an obscure subsection of the Communication Act’s controversial section 127. It carries a potential six-month prison sentence.

Ms Wilson told the court: ‘There are two main issues. The first rests on whether Twitter is a public electronic communications network,’ which she said ‘had not been litigated in the high court’.

The second was the defendant’s intent, claiming the impact of the messages was ‘irrelevant’ and referencing also her rights under Article 10, a section of the European Convention on Human Rights that covers freedom of expression and to hold opinions.

The trial is scheduled to take place at the magistrates court over two days in front of District Judge Dodd [I think; it sounded like Dobbs] in a case that has attracted international attention after Mrs Scottow’s arrest including from Donald Trump Jnr and Prime Minister Boris Johnson.

Mrs Scottow spent seven hours in a cell at Stevenage Police Station after she had been frisked in front of her children at home in Hitchin, Herts, by four officers from Hertfordshire Police on 1 December last year. Her daughter, who is autistic, was aged 10 at the time and her son 20  months.

According to ushers, Ms Hayden was given permission to attend the hearing, although witnesses are usually not allowed into the courtroom until giving evidence. Ms Hayden left the building before the hearing began.

Civil action against Mrs Scottow has been stayed until after the prosecution trial.

Please credit the source when using information from this blog. All rights retained. Thank you.