Skip to content
UK’s First Transphobia Trial Thrown Out. Trans defendant says: ‘It was the worst 10 months of my life.’ 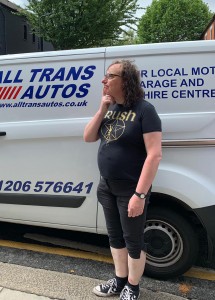 The first trial for transgender hate crime sensationally collapsed on 1 March 2019 in a case against a transgender blogger charged with harassment over an argument on Twitter with a trans rights campaigner.

The judge in the case of the Crown against Miranda Yardley, a prominent women’s rights activist who is transsexual, decided there was no case to answer after hearing evidence from Helen Islan, a volunteer for controversial trans children’s charity Mermaids.

The trial would have been precedent setting if it had been successful, according to defence counsel Gudrun Young of Hare Court Chambers.

Islan, a mother of three who lives in Leeds, went to police claiming Ms Yardley had ‘outed’ her transgender child on Twitter, using the child’s trans status to target and harass her.

But District Judge John Woollard declared the prosecution had failed to provide evidence of a course of conduct that constitutes harassment, with the case centring on one tweet in which Yardley had linked to a Google search of Islan that showed a picture of her family including her transgender child.

The judge decided Islan herself had already identified her child as transgender by having previously posted publicly on social media in her own name as the parent of a transgender child. Noting that Ms Islan had even discussed the child’s medication online, he said:

‘Ms Islan seems to have been putting information about her child around the internet for years.’

Islan appeared distressed and often tearful giving evidence by video link, after a request to have reporting restrictions enforced was rejected. The Crown applied to prohibit publication of the complainant’s name and details that could be used to identify her and her transgender child under section 46 of the Youth Justice and Criminal Evidence Act 1999.

‘The case concerns an allegation which the Crown submits is essentially a transgender hate crime. Allegations of this nature should where at all possible be prosecuted.’

On Islan’s behalf, the Crown suggested the defendant may not be able to give evidence unless she was assured anonymity.

The court was adjourned after counsel for the Crown said her witness needed time to consider if she was able to give evidence when District Judge Woollard ruled against the application in favour of ‘huge public interest’. On reconvening and discovering Islan had still not made up her mind, the judge said:

‘Let’s save your client the embarrassment of being dragged into the courtroom and give her one last phone call.’

When Islan then agreed to proceed, appearing on camera from Leeds clutching tissues and breathing rapidly, she was asked by the defence counsel, Ms Young, if she had been attempting to blackmail the court by stating in a late submission that she ‘would have no choice’ but not to give evidence if the application wasn’t granted. Islan replied she was ‘trying to save my child from further harassment’.

identification which allows people to be recognised as being transgender simply by declaring themselves to be the opposite sex. 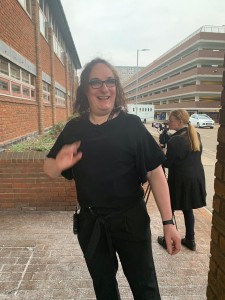 Islan, tweeting under the name @MimmyMum, joined the conversation to argue in favour of self-ID. Miranda Yardley, who has also surgically transitioned but identifies as transsexual, added a screengrab which identified the @MimmyMum account as belonging to Helen Islan in order, he later said, to highlight her role as a political activist. The screengrab of a Google search of Helen Islan’s name also included a photograph of Islan with her children.

In her evidence to the court, Islan claimed the post made her feel ‘stressed, sick and ill’ and said ‘my child is so distressed that people are using him to target me’, adding she had even considered changing her family name to protect her child’s identity.

It emerged, however, that the picture had originated from one of Islan’s own social media accounts that is now dormant. Islan argued she had removed the picture and Yardley would have had to have undertaken an extensive search to have found it. But the judge disagreed, saying the image came up on the first page of a Google search.

Giving evidence during which she was described by the defence as a ‘hugely controversial figure with harmful and dangerous views’ and responsible for helping make the debate around transgender issues ‘toxic’, Ms Islan was also asked to avoid repeatedly accusing Ms Yardley of deliberately using her trans child to ‘target’ her on Twitter and of misgendering her child.

‘We’re going to be here forever if every time I ask you a question you repeat all the evidence,’ Ms Young told Ms Islan. The judge interjected: ‘We certainly won’t.’

Ms Islan said that she had been unable to market herself professionally on social media for fear of being targeted by those who now knew her identity as a result of the screengrab.

The defence, however, suggested Ms Islan herself had effectively outed her child by pointing out in her own posts in response that the image in the screengrab included her transgender son. Ms Islan said she wanted people to know how upset she had been by the image appearing on Twitter, saying she was ‘in pieces’ and to ask others to report the post. But Ms Young said:

‘It was you who made the extra link this was your trans son Ms Yardley did not make. You’re the one who identified your son, not Ms Yardley. ‘Any reasonable person who saw that would know it was me and my son,’

Ms Islan said: ‘I was desperate, my son was desperate. Miranda Yardley was in a position of power. Twitter wouldn’t react. I didn’t know what to do.’

Ms Young referred to several pages of evidence of social media posts in which Ms Islan was ‘regularly tweeting about your trans son, about him taking blockers, that he had “come out” at school’.

The defence also made reference to Islan’s own behaviour on the social media platform, highlighting in particular posts about Stephanie Davies-Arai, founder of Transgender Trend, an organisation that provides schools with advice packs that suggest a ‘watchful waiting’ approach to children identifying as transgender.

‘You have pursued Ms Davies-Arai relentlessly by social media,’ Ms Young said to Ms Islan who replied, ‘The pack she puts together is potentially damaging.’

The judge then interjected: ‘There is a tweet that says she had an unhealthy obsession with trans kids. Did you write that.’ ‘Yes,’ Ms Islan replied.

Ms Young continued: ‘You have repeatedly called Stephanie Davies-Arai transphobic and encouraged others to do the same. You have contacted journalists and asked them not to report what she says. You have done your best to silence her views.

Bringing Ms Islam’s evidence to a close, the judge asked the barrister for the Crown Prosecution Service: ‘Where is the evidence [of harassment] taking into account the need for free speech? You have to show a course of conduct and at the moment we have one tweet. Where is the evidence for Miranda Yardley outing Ms Islan’s son?

‘There is no case and there never was a case,’ he concluded awarding costs to the defendant.

It later emerged that Debbie Hayton, a transsexual schoolteacher who was due to give evidence for the defence, had been called ‘a man in a dress’ by Ms Islan on social media.

‘This has been the worst ten months of my life,’ Ms Yardley said, following the judge’s decision. He continued:

‘It seems to be a deliberate tactic by representatives of Mermaids to use the police to silence criticism and close down analysis of their activities which are undoubtedly controversial and with lifelong implications for children and their families.’

Ms Young said: ‘This was a prosecution allegedly for harassment but which, in fact, had at its heart an ideological disagreement over transgender issues.

‘A successful prosecution in these circumstances would have set an extremely dangerous precedent, potentially criminalising the legitimate expression of political views and curtailing free debate on social media. The judge was right to conclude there was no case to answer and that it was a prosecution that should never have been brought.’